Snapsis of the above image

This astonishing GIF comes from Nanex, and shows the amount of high-frequency trading in the stock market from January 2007 to January 2012.

The various colors, as identified in the legend on the right, are all the different US stock exchanges. What we see here is relatively low levels of high-frequency trading through all of 2007.

Then, in 2008, a pattern starts to emerge: a big spike right at the close, at 4pm, which is soon mirrored by another spike at the open. This is the era of traders going off to play golf in the middle of the day, because nothing interesting happens except at the beginning and the end of the trading day. But it does not last long.

By the end of 2008, odd spikes in trading activity show up in the middle of the day, and of course there is a huge flurry of activity around the time of the financial crisis. And then, after that, things just become completely unpredictable. There is still a morning spike for most of 2009, but even that goes away eventually, to be replaced with sheer noise. Sometimes, like at the end of 2010, high-frequency trading activity is very low. At other times, like at the end of 2011, it is incredibly high. Intraday spikes can happen at any time of day, and volumes can surge and fall back in pretty much random fashion. 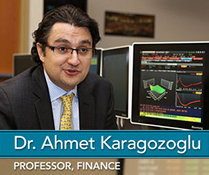